A picture is worth... 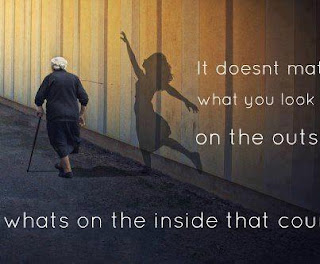 It doesn't matter what you look like on the outside,

its whats on the inside that counts.

Found this while blog hopping at ﻿http://www.theinspiredhousewife.com/.  Love it.
Posted by EJN at 8:58 PM 1 comment: Links to this post

On the Lord's Day

"This life therefore
is not righteousness
but growth in righteousness;
not health but healing,
not being but becoming,
not rest but exercise.
We are not what we shall be
but we are growing toward it;
the process is not yet finished
but it is going on;
this is not the end
but it is the road.
All does not yet gleam in glory
but all is being purified."
~ Martin Luther ~

Six days we toil, pray, and work in Christ, by grace towards the coming of the Kingdom.  But, on this day, we rest, we worship together as His bride the church in small and large enclaves all around this huge world to give Him thanks for who He is, for His rescue of us, and as a bit of a reminder that heaven is coming.


"GOD REST YOU MERRY, GENTLEMEN"
Do not be afraid, I bring good news of great joy that will be for all people. -Luke 2:10
Posted by EJN at 7:33 AM No comments: Links to this post

“We — or at least I — shall not be able to adore God on the highest occasions if we have learned no habit of doing so on the lowest. At best, our faith and reason will tell us that He is adorable, but we shall not have found Him so, not have ‘tasted and seen.’ Any patch of sunlight in a wood will show you something about the sun which you could never get from reading books on astronomy. These pure and spontaneous pleasures are ‘patches of Godlight’ in the woods of experience.” - C.S. Lewis, Letters to Malcolm Chiefly on Prayer

"It is not what a man does that determines whether his work is sacred or secular; it is why he does it." - A. W. Tozer

For we are God's workmanship, created in Christ Jesus to do good works, which God prepared in advance for us to do. (Ephesians 2:10)

Posted by EJN at 9:22 AM No comments: Links to this post

Do you know Wilma?

This story is from Liz Cutis Higgs, I have only been acquainted with her children's stories (The Parable of the Pumpkin Patch,  my favorite, she also has the Parable of the Lily, and a few others) until today, I read, "Help! I'm laughing and I Can't Get Up" while enjoy the brief coolness of our front porch this morning.

When Eve Met the Snake, She Wasn't Dressed Either
It was a hot, dry summer on Betty and Lloyd's Kansas farm, so hot that everyone was looking for a cool, shady place to camp out, including the snakes.  Betty lived in an old rock houses, and they were in the process of adding a bathroom.  One evening as she was toweling off after a refreshing bath in the unfinished bathroom, Betty heard something scritch, scritching across the bathroom floor.
Glancing in the direction of the noise, she spotted a spine-tingling, fear-inducing sight: A snake was headed right for her!  With a leap and a bound that would put Superman to shame, she raced through the bedroom, dining room, and kitchen and was out the door, across the porch, and to the end of the walk where her husband intercepted her mad dash.
Betty admits, "coming to my senses, I realized I did not have on a stitch of clothing,  Modesty overcoming fear, I sheepishly and cautiously went back in the house, covered myself with a tea towel and perched on the kitchen table until Lloyd disposed of the harmless garden snake."
Were her troubles over?  Of course not.  She began fretting about their neighbors, John and Mattie, who lived across the road.  Had they been sitting on their screened in porch?  Betty's exit had been fast but far from quiet.  Had she attracted their attention?
She would soon find out, since she worked with Mattie.  She avoided her at work the next day, and instead described her great adventure to her best friend, Wilma, including her fear that she might have provided a free "peep" show for her neighbors.
Betty explains, "Wilma soothed me as a good friend would and assured me she would discreetly find out if Mattie was aware of any goings-on at our house.  Lunchtime came, and Wilma gave me the bad news.  Mattie and John had been sitting on the porch.  They heard the shrieks and saw the whole thing."
Betty avoided her neighbors for the next few weeks until one day Wilma confessed the truth:  Mattie knew nothing, heard nothing, and saw nothing!
I think I'd be more afraid of Wilma than a garden snake.

After I quit laughing, the last line, it stuck to me.  Hmmmm....Fretting over what might be... do you ever do that?  I fret over what I could of, should of, or might have done, to help or to offend someone.  Well, God has his finger on it, and the thought came to mind, how often, I have let "Wilma", let's call it the Devil, tells me stories that bring angst, and that kind of brain noise - brings about a loss of relationship because we lose our freedom in the fretting.  Not so funny.
God didn't design us for fret but for freedom.
Posted by EJN at 11:22 AM 4 comments: Links to this post

EJN
We have been married over 20 years and have a lovely daughter who is almost grown. We enjoy coffee with conviviality, books and good movies. This blog is mostly to share musings over readings, life and the like with family and friends.